The first three episodes of UQ Holder! were pretty well overstuffed with setup and exposition, getting the main cast into the titular organization as well as laying the Negima-sequel seeds the show is built on. The good news is that with all that out of the way, the show is able to set up a new, simpler story arc and hit the ground running. Or flash-stepping, anyway. 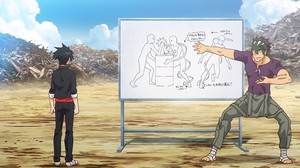 Episode 4 concerns Tota and Kuromaru getting their first official assignment as members of UQ Holder!, setting out with Karin to protect a village of slums from a group of bandits that want to wipe them out for apparently classist reasons. There's some decent bits of world-building as the group arrives and meets the impoverished locals, with some exposition on how haves and have-nots have only grown further apart in this supposedly enlightened future world. And it's amusing to see how naturally this scrappy group of kids and their guardian nun turn to their friendly neighborhood immortal yakuza for protection.

‘Amusingly pleasant’ describes a lot of this episode's first half. Little details like Tota being bad at arm-wrestling but great at cooking add snippets of character, and the leverage-based dinner duel quickly leads into a subplot about Tota trying to learn a flash-step technique. Picking this up from a suggestion Karin gives him is a little out-of-nowhere, especially when we cut to Tota just doing a rudimentary version of the move out in a field. While it's an interesting idea that these overpowered ass-kicking immortals can just casually pick up and practice high-end ninja techniques, it still comes across as abrupt. It's mainly there in service of hooking Tota up with a mysterious traveling martial artist named Kaito who helps him refine his technique. The two bond while Tota waits for the yet-unseen attackers to arrive in the village and yeah, you can already see where this is going.

As overplayed as this sort of dramatic irony can be, it still makes some solid setup for the first portion of this episode. The comedic timing is snappy, with gags like Tota practicing by using his feet for everything being immediately amusing, or the way they finally get around to explaining how flash-step helps in arm wrestling, only to make fun of how unnecessary the explanation was after all. Even the flash-step itself is an animation-economical trick that looks neat even with the show's meager resources. In general, the direction of the series really comes alive in this episode, after three episodes of needing to more pragmatically squeeze everything in.

That well-paced setup pays off when the predicted attack finally comes to the village. That surprising violence from the first episode turns out not to be a fluke, as low-tier members of UQ Holder! get sliced up real good, and later parts of the fight see even more limbs hacked off (courtesy of Kuromaru and his super-healing). Given that it was present at the start, all this blood isn't too outrageous, doing a decent job of selling that these characters are immortals who can stand to take more damage than normal people. If anything, it's a relief knowing that they can bounce back from wounds like these naturally, as opposed to wondering about something like how much blood Zoro from One Piece actually has left at the end of a fight.

What's more surprising is that after laying low for several episodes, Ken Akamatsu's trademark fanservice is here in full force for this episode. Karin gets attacked in the shower by one of the mercenaries, with only a static slide of Negima mascot Chamo covering her body as an otherwise serious fight ensues. Honestly, the shower setting isn't too over-the-top; it does a good job of showing how cool and unflappable Karin is for fighting without hesitation in this situation. But given the gravity of the fight, a regular old steam censor probably would have been better (or just don't not detailing her body at all, hardly out of character for Akamatsu). It's a real pity, because this is probably the most dynamic, well-animated fight in the show so far, but the smiling cartoon weasel slapped on the screen makes it much harder to take seriously.

In general, the battle animation in this episode is particularly on-point (even if other parts cheap out, like not animating Kaito's mouth in his werewolf form), and as expected the highlights are the various anti-immortal measures taken. Kaito uses a cool cross-seal technique for vampire Tota, and his instant flash-step slash of Kuromaru is a neat trick as well. Less appealing is the guy attacking Karin's decision to bind and suggestively torture her damage-absorbing body; it's probably the least necessary fanservice of the episode, and they easily could have sold the intensity of the scene without sexualizing the violence so much.

But that's a relatively minor quibble of presentation in what's probably the most solid episode of UQ Holder! since its premiere. After finally getting all the setup out of the way, and chilling out on the gratuitous Negima references for at least one episode, the show produces a fun half-hour of action. After some shaky delivery of its prior elements, it's impressive how easily this episode packs in setup, character development, and world-building with an explosive payoff, ending on a perfectly-timed suspenseful shonen cliffhanger.
B

Ummm...where can this be watched? Is it on YouTube or Crunchyroll?
Reactions: GOLDENAGATO

Is this still the mist arc? The manga sorta made it canon so i guess i should start watching it.
Reactions: IceWraith
You must log in or register to reply here.